What makes a voting system “fair” when the stakes are high?

VoteUp uses range voting because it’s expressive: by collecting as much information as possible about a group’s preferences, range voting can identify good choices that might not be immediately obvious from a quick show of hands. When we talk about “group preferences”, though, we assume that everyone is representing their individual preferences as accurately as they can. That assumption makes sense in the context of a small group of friends deciding on something relatively unimportant, like where to go to lunch, but what happens when the stakes are higher? In an election where the stakes are higher, individual voters have an incentive to misrepresent their preferences in order to sway the group’s decision as much as possible: this type of misrepresentation is known as “strategic voting”.

The effect of strategic voting depends on the voting system

Strategic voting behavior is highly influenced by the voting system used for an election. The most familiar type of strategic vote is in response to the “spoiler effect” that plagues plurality vote systems: if we go back to our example of the 2000 presidential election, we see that many voters who actually preferred Ralph Nader cast their vote for Al Gore, on the understanding that a vote for Al Gore carried more weight than a vote for Ralph Nader. Open primary systems introduce even stranger behaviors: liberals may vote in a primary to nominate very conservative candidates, in the hopes of making a liberal candidate more attractive in a general election.

Range voting satisfies the “independence of irrelevant alternatives” criterion, so it’s essentially immune to spoiler effects. However, with range voting, one voter can increase their influence on the outcome of the election by making their opinions as extreme as possible. Consider a small club that’s electing a new president. There are fifteen members voting to choose between three candidates. According to the group’s “true” preferences, Marie should win the election: 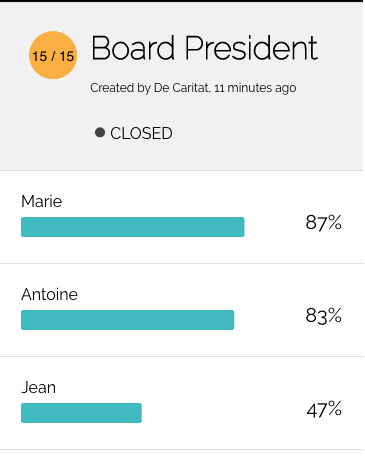 Now, consider a voter Nicolas who wishes Antoine to win the election. Even though Nicolas knows Antoine isn’t perfect and doesn’t necessarily think Marie would be that bad, he exaggerates his opinions. 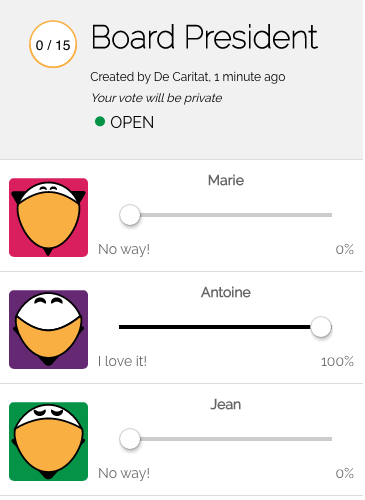 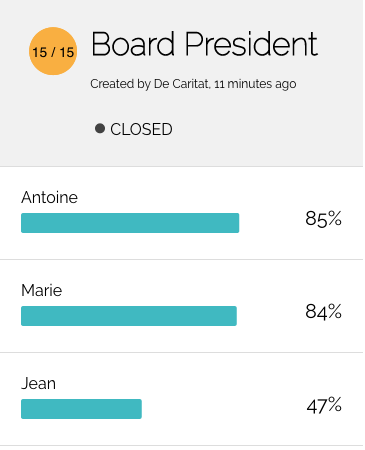 By misrepresenting his preferences, Nicolas is able to sway the election to Antoine. While it’s hard to say he’s “cheating” in any way, his vote probably seems unfair to other voters who preferred Marie but didn’t exaggerate their opinions. Why should their vote count for less than Nicolas’? Once everyone realizes that some voters are voting strategically, there’s a strong incentive for everyone to vote strategically. What happens then?

If the voters aren’t sure ahead of time how everyone else will vote, then there is a very simple strategy for them to follow: for any candidate they think is acceptable for the job, they should give 100% support, and for any candidate they don’t like, they should give 0% support. If everyone else is voting strategically, then anything other than a 100% or 0% vote is a waste. Now, if everyone is voting this way, the vote becomes indistinguishable from simply voting “yes” or “no” on each option -- what’s known as an “approval vote”. “Strategic range voting” and “approval voting” will always produce the same results. In this case, Marie is returned to her rightful win: 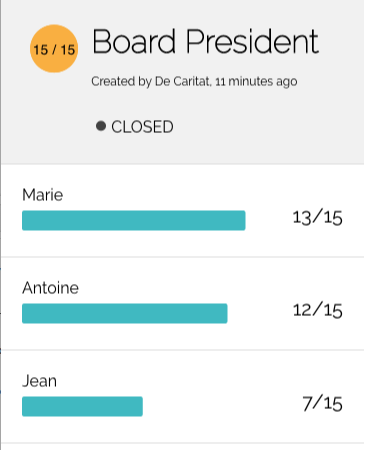 You can intuitively see that approval voting behaves very much like range voting, and in fact it satisfies almost all of the same theoretical voting criteria. The only major difference is that it’s less expressive because every voter is forced to make “yes” or “no” decisions -- and in “strategic” elections even that difference disappears since strategic “100%” and “0%” votes are no different from “yes” and “no” votes.

Voting theory isn’t the only consideration

Considering that range voting and approval voting are so theoretically similar, why does VoteUp provide both options? It’s not about the theory, but the appearances. In highly contested elections, approval voting appears fairer to many participants because everyone is forced to vote the same way: there is no distinction between an “honest” vote and a “strategic” vote. Additionally, approval voting is somewhat simpler and faster, since there’s somewhat less information to collect from each voter.

Of course, in the real world voter behavior is not as simple as we make it sound here: for instance, even in highly contested elections using range voting, a surprisingly large number of voters avoid strategic voting out of a sense of honesty (link). This makes the choice between range voting and approval voting even more subjective. Since we introduced approval voting to VoteUp in response to user feedback, it’s been chosen in roughly 35% of polls -- want to tell us why you chose it?